Home / Camera Tips / Canon VS Nikon, Comparison Which One is Better

Canon VS Nikon, Comparison Which One is Better

By abdul aziz
On 8:26 AM
Canon VS Nikon, Comparison Which One is Better
When we talk about which one better between camera Canon SLR or Nikon SLR? Many of us who conclude that Nikon cameras are better and not a few people who say that the slr Canon is better, if I think they're both best camera, depending on who is using it, well it would be nice before we pass it, let us discuss extensively about the advantages and disadvantages thoroughly between Canon and Nikon DSLR cameras 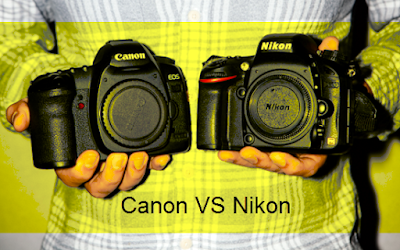 1. Aspects of Technology
In terms of technology, many of the opinion among photographers that canon slightly ahead of Nikon, Canon has a system of image processing capable of maintaining a frame rate that is faster than the Nikon, so as to help smooth the results in the image so it does not need to do too much editing after shooting, this technology is highly preferred by photographers who used to do Point-and-shoot, for nikon camera image processing system more slowly, this can be circumvented by using Raw mode, but not all of the photos grafer liked fast image processing system such as canon

advantage on the nikon camera located on the lens and its features, because the lens which is owned by nikon camera provides better picture quality than the canon, and the features that were supplied by Nikon are also considered more fully, it appeals to professional photographers more admit using a Nikon camera.

2. From the Consumer Side
If we discuss which is better between the camera DSLR Canon and Nikon will never be endless because both cameras were same as great and the better the quality, the issue staying who uses it, for those who use the camera DSLR for the brand Canon, they are easier to in operate and menu contained in the camera canon easier to understand it than the nikon, canon is not as difficult as Nikon tends to use skills in shooting, comparison Canon cameras use a skill only 30% and Nikon 60%, but if we gives of the opinion which is more better back again on ourselves

For Photographers Midle or semi-pro is actually not much different with beginner but the selection of the best camera for this type of photographer is hanging with the comfort and character of the photographer, there are more like Canon because its performance has a processing frame rate that is faster, there are also choose Nikon because of its reasonable quality and features a more complete

Professional photographers perception that the majority of them chose the Nikon brand cameras, because he has a full range of features, it also has a better sensitivity in low light with extraordinary control photo, but it also has a more premium quality lens than the Canon cameras

3. Quality Resilience of Camera
Determining the camera which is more powerful of the two brands are indeed difficult to differentiate, because sometimes vote a lot of people on both cameras are subjecktive, in opinion majority of my friends photographers say that Nikon was more resilient, but when I look at youtobe comparison resistance between Nikon and Canon at the resilience of the physical is not much different from just a little superior to Canon, because the canon is still able to function when in the flush with hot water and nikon get a technical issue when shutter, Well conclusions in accordance with the opinions of a wide range of quality resources both cameras are almost same, only slightly more in favor of Nikon cameras, for more details you can see this video


4. Camera Prices
Because the quality of both cameras are good, the price is also good, that distinguishes the price of them, they have the advantage in every grade level, sometimes to the type and the same class of Nikon's more expensive, sometimes in another type Canon was more expensive, so be smart in choosing a camera, understood by the needs and shooting abilities of our class

Conclusion
Both camera are the same as having advantages and disadvantages, depending on your needs. for those of you who feel beginner photographer, probably the best camera for you is the brand Canon DSLR cameras for speed and operational easier to learn, and while for you are a professional photographer better use of Nikon DSLR cameras because of the quality and yield better than canon, but if you ask me personally canon and nikon they have a same quality, if we know how to use and take advantage of our cameras
Canon VS Nikon, Comparison Which One is Better 2016-02-19T08:26:00-08:00 Rating: 4.5 Diposkan Oleh: abdul aziz
Tags: #Camera Tips